Over the last years, it has been said that Latin America has been going through a process of “feminization of agriculture”, a phenomenon caused by an increased participation of women in agricultural activities, whether as non-salaried family workers or independent producers; or, as salaried workers. This tendency is, most likely, not solely based on the increasing number of women taking part in the agricultural sector, but also on the decreasing number of men working in said sector[1].

In the case of Bolivia, data of the National Agricultural Census 2013 reveal a totally different situation, where out of 4.689.264 people taking part in the agricultural production of 2012/2013, 61,4% were men and only 38,6% were women. As it can be seen in Chart 1, in eight out of the nine departments the number of women participating in agricultural activities is lower than that of men. These differences are more noticeable in the departments belonging to the valleys, and even more so in the departments of the plains, where there is a stronger presence of capitalism in the countryside. 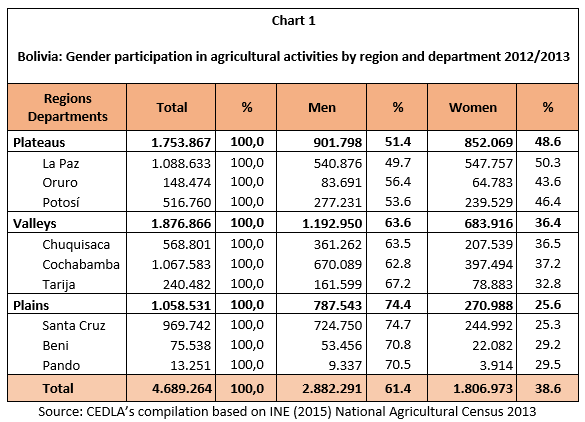 However, the census also reveals that in five out of the nine departments, the number of women performing salaried agricultural work outgrows that of women who perform non-salaried work. Such are the cases of Pando, Beni and Santa Cruz, where salaried women represent 66,1%, 65,6% and 53,8% of total workforce; and Cochabamba and La Paz, where female participation in agricultural activities is of 53,4 and 52,1 percent. These numbers concur with the data of other studies carried out in Latin America: salaried work is becoming more commonplace among women who take part in agricultural production activities. (See Chart 3)

Actually, salaried work is becoming more commonplace among workforce in general. In the case of men, 59,8% of total male workforce in agricultural production activities is salaried. Growing numbers of salaried work among men occur in seven out of the nine departments; only Oruro and Potosí have more non-salaried workers than salaried ones.