According to the data presented by the Agricultural Census 2013, Bolivia’s agricultural production is mostly rainfed, i.e. it depends on rain and not on irrigation. Actually, only 32,9% (286.536) of the APUs registered in the census employ some kind of irrigation for their crops. The combined area of APUs that do irrigate their crops –268.844 ha– barely accounts for 7,1% of total cultivated land area, which amounted to a little more than 3,7 million hectares in the 2012/2013 agricultural year (See Chart 1).

These numbers explain the low productivity of our crops, as well as the lack of year-round availability of some products, which have to be imported during specific times of the year. One good example of this is the potato, which, in spite of an ongoing increase in production, is still unable to fulfill domestic demand all year round.

Most agricultural exploitations employing irrigation for their crops are located in the plateaus and the valleys (94%), and concentrate (conjointly) 68,1% of total land area cultivated through this method. At the departmental level, Potosí, Chuquisaca, Cochabamba and Tarija present a deep contrast between APUs that do not employ irrigation and those who do, the latter significantly outnumbering the former. In the case of Santa Cruz, total cultivated land area amounted to 2,7 million ha.; that is, 73,0% of the national total; however, only 82.000 ha. were cultivated through irrigation.

Since most APUs employing irrigation are in the plateaus and valleys of the country, they do not hold as many hectares as their eastern counterparts in the plains, hence the low average number of hectares per APU (national level) within this category: 0,93. 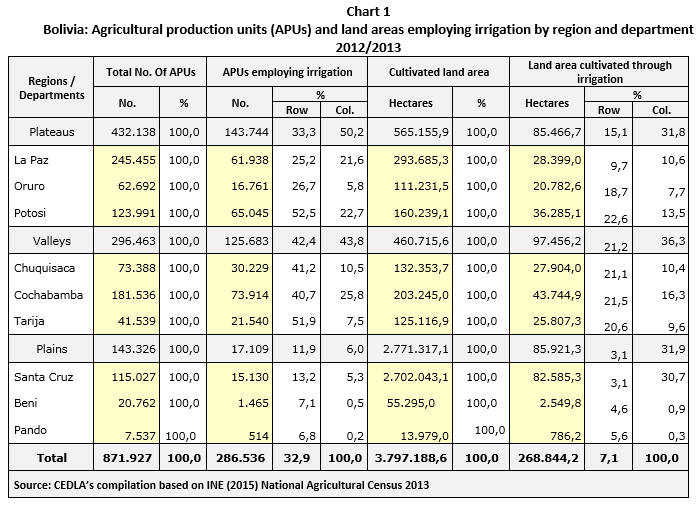 Among the three types of irrigation considered by the census, gravity-fed irrigation is the most widespread. The literature concerning this subject describes this method as an ancient, primitive irrigation system that is still used in small croplands, but has the potential to be implemented in larger areas, as long as it is adapted to specific crop, soil and temperature conditions. (See Chart 2)

More advanced forms of irrigation, like spray irrigation and drip irrigation have increased their presence in La Paz, Cochabamba and the departments in the plains. 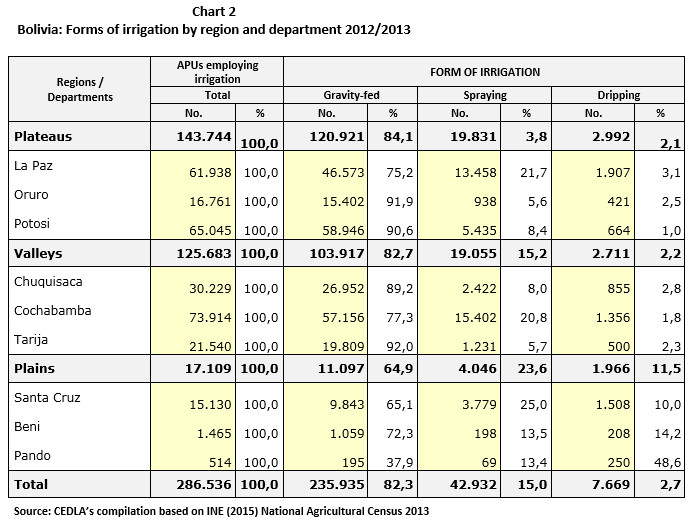 Chart 3 shows the predominance of eleven kinds of crops (corn, potato, alfalfa, etc.) in the land areas cultivated through irrigation. Conjointly, they account for 71,3% of crops within this category. 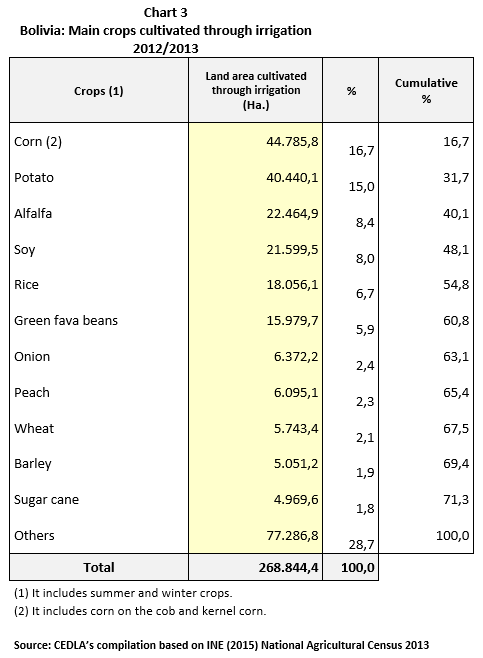