The data presented in the Agricultural Census 2013 published by INE (National Institute of Statistics of Bolivia) indicate that the agrarian structure of Bolivia has not substantially changed in the last thirty years. Out of the total number of agricultural production units (APUs), 58,9% (507.243) are in the range of 0,01 to 4,99 hectares in size. These 507.243 APUs –under ownership or usufruct– cover an area of approximately 738.000 hectares, which barely represents 2,1% of total number of hectares of all APUs combined.

The stratum in charge of exploiting these lands –of which the average area amounts to only 1,45 ha.–is comprised of both semi-proletarianized peasants, and proletarianized landowners (of lands insignificant in size), who rely on selling their work in the agricultural sector and other sectors of economy. Out of the total number of APUs in the range of 0,01 to 4,99 hectares, 45,4% (230.422) are less than a hectare in size.

These numbers are proof of the land size reduction that started in the 90s as a response to the “unproductive latifundia” of the late 70s and early 80s, where extensive land areas went under the control of a few people. Contrary to popular belief, neither the INRA Law nor the Law of Community-Based Redirection of Agrarian Reform played a significant role in this size-reduction phenomenon; instead, it was rather the entry of these lands to the market, whether by way of selling or renting, that directly contributed to the reshaping of the agrarian landscape in those days.

However, even though the average land size for lands in the range of 100 and plus hectares has now decreased, the number of APUs in this range has almost tripled: from 12.160 in 1984 to 33.608 in 2013. Proprietors in this range are either capitalist agricultural businessmen, or terratenientes [1] who obtain capitalist rent from their lands.

On the other hand, data on the middle stratum evidence a fortified presence of strongly mercantilized medium peasants, who are typically concentrated in lands ranging from 5,00 to 19,99 ha.; and a similar tendency with regards to small capitalist agricultural producers (rich peasants), who are direct producers but also hire salaried workforce, and are typically concentrated in lands in the range of 20,00 to 99,99 hectares. 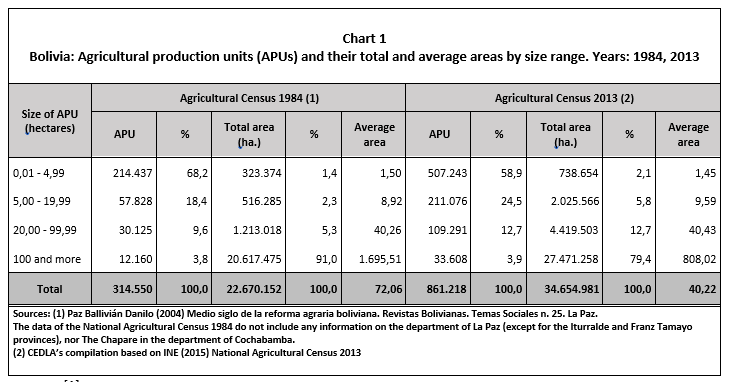 [1] Terrateniente: a landowner that usually owns great extensions of land.