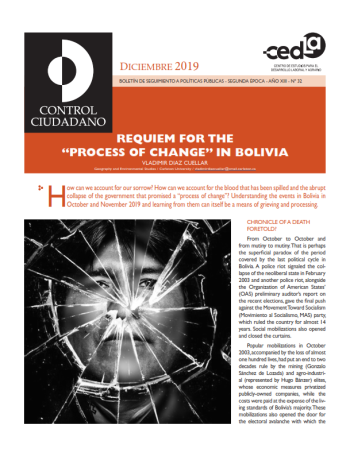 Control Ciudadano 32: Requiem for the “Process of Change” in Bolivia

A political cycle has closed and its requiem must be played. Political processes rarely fit into prefabricated ideological schemes and must be considered in their complexity. We cannot look to the future without facing the mistakes of the past. When the global economic crisis, which has been in fermentation during these past years and in relation to which the economic policies of the MAS government have made the country more vulnerable, finally occurs, other songs will be played. We will have to travel new paths. For now, it is time to reorganize, to clean house. For those abroad, international solidarity must be not with he who wanted to be the supreme leader, the caudillo, but with social movements during their painful process of reorganization and in defense of the social gains they’ve acquired over past years.

Control Ciudadano 32: Requiem for the “Process of Change” in Bolivia
Descargar
128 downloads7.20 MB