The importance of salaried work in agricultural production

Unlike population censuses and household surveys, which only take into account a short specific period of time (a week or a month in the year) when collecting information on economic activities, the National Agricultural Census 2013 has gathered data on the entirety of the agricultural year (from July 2012 to June 2013), namely on the total number of workers who perform salaried and non-salaried work in agricultural production units. By doing this, the Census manages to have a better understanding of the nature of agricultural labor and its temporariness, which results in more complete and reliable information.

These methodological differences have a great impact on the obtained results. Whereas the Census 2013 reveals that 4.689.264 people performed agricultural work in APU’s, the National Census of Population and Housing 2012 points out that only 1.252.750 people (from age ten upwards) were engaged in agricultural activities. This difference in results between the two surveys confirms the increasing importance of temporary work in agricultural production, and how this is affected by the migration flow during key moments of the agricultural production cycle. For instance, the inflow of people who go to the countryside (from cities and other rural areas) to perform agricultural chores tends to have its peak during harvest season.

As for departmental and regional differences, the numbers show that in the departments of the plains (especially Santa Cruz) salaried work takes almost three quarters of total workforce, which is not unexpected given the very consolidated capitalistic spirit of agriculture in this region. Nevertheless, salaried-work in agricultural production has also strengthened its presence in western departments: Chuquisaca at 41.1%; La Paz at 53.1%; Tarija at 57.6%; and Cochabamba at 60.0%.

Finally, if we analyze the results obtained in the three most developed departments of Bolivia -La Paz, Cochabamba and Santa Cruz- (each one in a different region, by the way) we can see that at rates of 577.477 for La Paz; 640.863 for Cochabamba; and 721.604 for Santa Cruz, they concentrate 76.5% of total number of salaried workers in the agricultural sector. 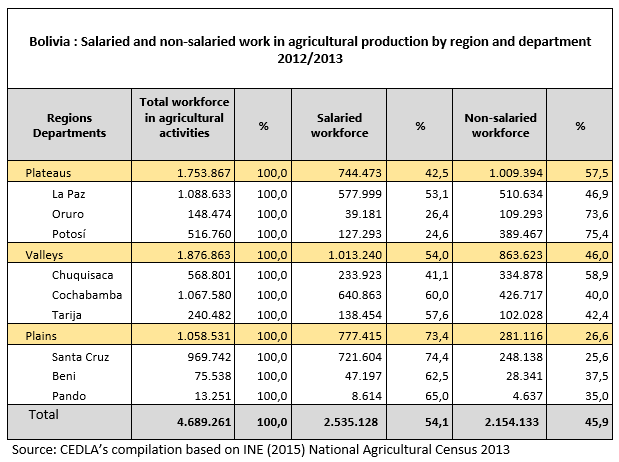