Some characteristics of agricultural production units (APUs) in charge of women

We have already explained how the agrarian structure of Bolivia has not really changed since the 1980’s; and how, according to the Agricultural Census 2013[1], a small nucleus of APUs is still in control –under ownership or usufruct– of large extensions of land, unlike the majority of APUs, which only hold a small portion of these lands.

This distribution is also prevalent among the APUs in charge of women. Out of 215.192 APUs run by women, 65% (140.036) are less than five hectares in size, thus exceeding the 56,8% registered by their male counterparts in the same category. Additionally, these APUs only hold 169.000 ha. of land, which translates to an average of merely 1,2 ha. per APU. Such low numbers force families taking part in these APUs to engage in off-farm work activities –whether as salaried or independent workers– since their work at these units is not enough to subsist.

On the other hand, 3% (6.183) of APUs in charge of women concentrate almost 4,5 million hectares of land; that is 75,1% of total land area controlled by women. Due to their large size, these APUs are not foreign to hiring salaried workforce, whether permanent or temporary. 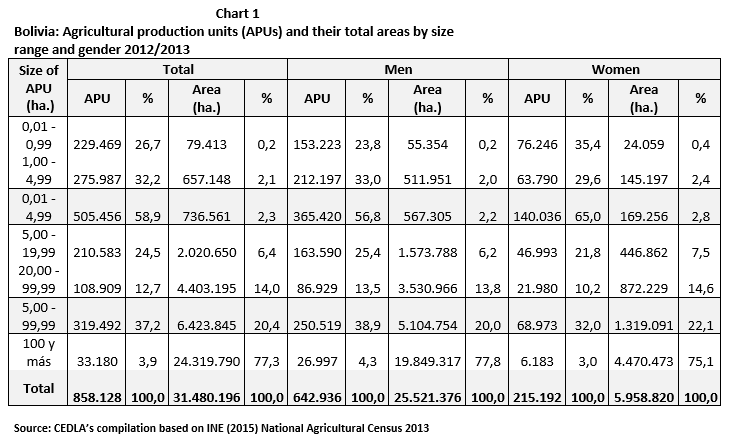 In the case of APUs run by women in the plains, there are some noticeable differences at the departmental level.

In Santa Cruz most APUs are in the range of less than 5 hectares in size (43,2%) –a stratum fundamentally composed of semi-proletarianized families– and also in the range of 5 to 99,99 hectares in size (48,5%); this last datum reflects the importance of agricultural exploitations in former colonization zones, where there is a strong presence today of small capitalist production units.

In Beni most APUs concentrate in the intermediate range –5 to 99,99 ha– (54,3%) and the upper range –equal or greater than 100 ha.– (22,8%), which is a reflection of the importance of extensive livestock farming in those lands.

Pando, on the other hand, presents many more APUs in the upper range –equal or greater than 100 ha– (60,9%). Such high proportion was caused by the distribution of non-timber-yielding forest lands at a rate of 500 hectares per native villager. 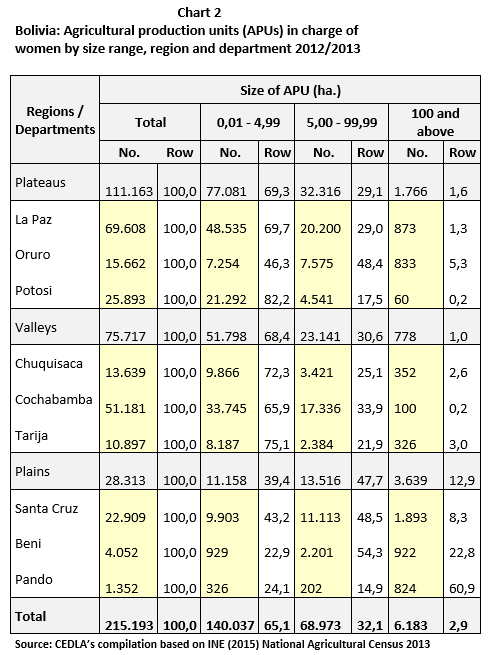 [1] This information does not include collective land property.