The departments with the lowest average area per APU are Cochabamba (6,87 ha.) and Potosí (7,43 ha.). Both of these departments feature a strong presence of small agricultural lands in their territories. Conversely, the complete opposite happens in the plains, where large areas of land are more commonplace. Such is the case of the average area in Beni (451,56 ha.), where there is prevalence of large haciendas[1] and extensive livestock farming; Pando (270,61 ha.), with its Brazil nut exploitations (barracas) and timber-yielding forest concessions; and Santa Cruz (123,60 ha.), where agrarian and livestock farming activities are extremely important. 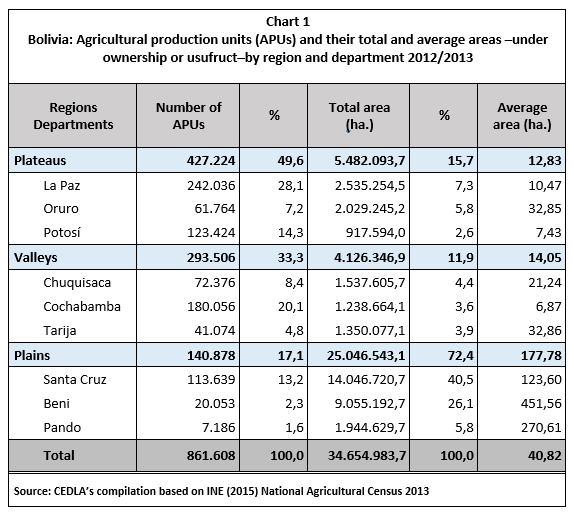 When comparing the data of the Agricultural Census 1984 with that of the Agricultural Census 2013 (which was discussed in further detail in the article “No substantial change in Bolivia’s agrarian structure”), we can observe that the agrarian structure of Bolivia has not substantially changed in the last thirty years. There is still considerable concentration of land as evidenced by how the minority of APUs exceeds the majority of APUs both in conjoint and average land size.

This structure responds to both the orientation of land policies from 1953 until today, and the functioning of the market, which enabled processes of land accumulation across the country. (See the chart below). 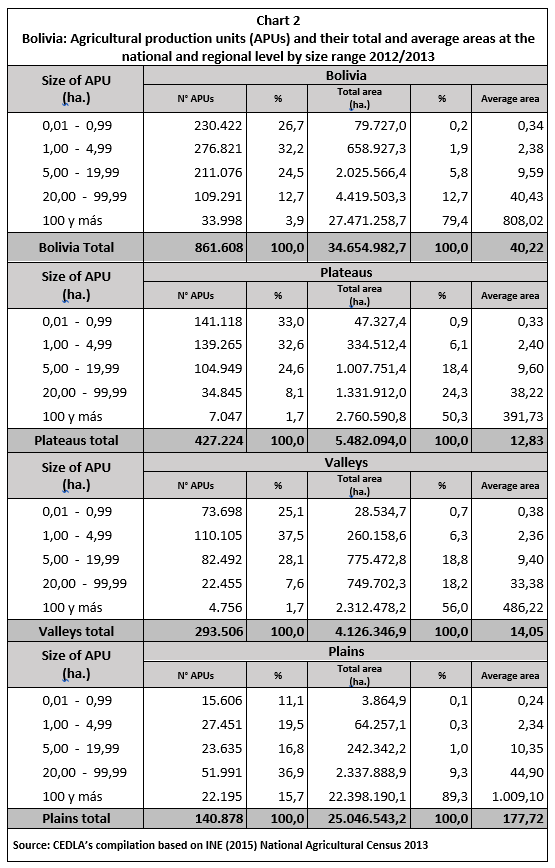 Both the plateaus and valleys of Bolivia present a significant number of APUs in the range of less than 1 hectare in size and 1 to 4,99 hectares in size –these are known for their limited size and –consequently–  for providing temporary workforce in both the agricultural sector and other sectors of economy. On the other hand, these two regions also present a phenomenon that was originally linked only to the plains: 1,7% of APUs –in both cases– concentrate a little more than 50% of total number of hectares of land at the regional level, thus breaking the myth of the inexistence of such great extensions of land in the central and western parts of the country.