One of the most relevant characteristics of the National Agricultural Census 2013 is the inclusion of data on salaried work in agriculture, a phenomenon of great importance in all the regions (plateaus, valleys, plains) of the country. In order to have a fuller grasp of it, and, consequently, have a better understanding of the changes that have affected Bolivia’s rural society from 1953 –the year of the Agrarian Reform– until our days, the Census 2013 analyzes the data by type of agricultural production unit (APU): 1) APUs that belong to communities [1]; and 2) APUs that do not belong to communities.

This differentiation comes in handy at the moment of addressing the still widely believed idea that there is no such thing as the purchase and sale of salaried workforce in agriculture among peasant and indigenous communities. This notion suggests that peasant and indigenous communities are (still) highly egalitarian societies with no social distinction between their members, which is typical of natural economy-based communities.

Given the characteristics of this piece, we will not analyze the assertions of the previous paragraph; instead, we will simply focus on verifying if the data presented by the census supports and validates such assertions.

At the departmental level, it is worth-noting that Potosí and Oruro are the only departments where APUs belonging to communities still present low percentages of salaried workforce. As for the rest, the hiring of salaried workforce is relevant, especially in Santa Cruz, Beni, Tarija, Cochabamba and La Paz, where salaried workers in agriculture already outnumber non-salaried ones. 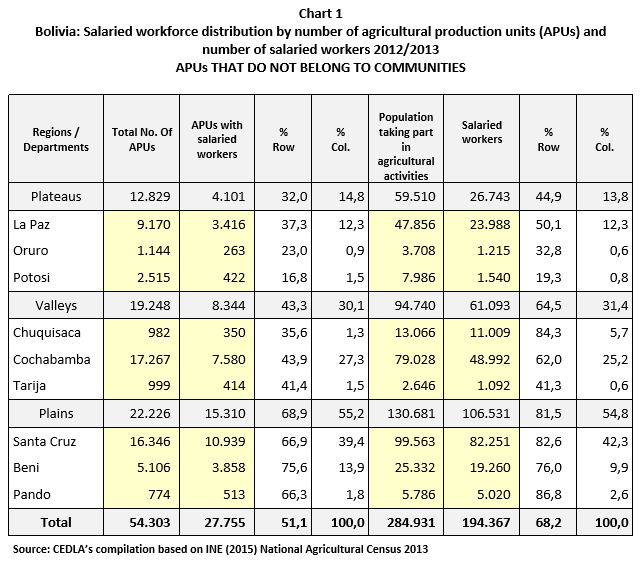 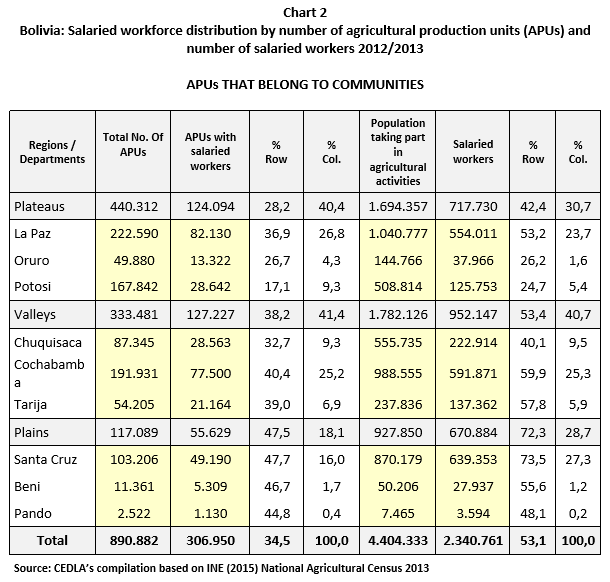 [1] The National Agricultural Census 2013 defines the concept of community as a “basic unit of social organization comprised of indigenous, intercultural and afro-Bolivian peasant groups or families that inhabit and control a determined territory, and develop their economic and productive activities in accordance with their manners and mores. INE (2015) National Agricultural Census 2013.