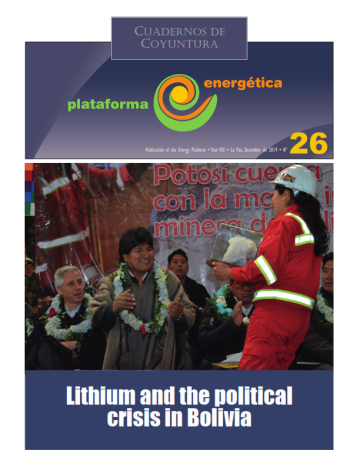 Cuadernos de Coyuntura 26: Lithium and the political crisis in bolivia

Over the course of almost 14 years, reality shaped the Movement towards Socialism (MAS) government so much that it became the best representative of the interests of the imperialist bourgeoisie, even if the government furiously denied this discursively.

That is one of the arguments that, Pablo Poveda, a researcher at CEDLA, exposes in this new contribution about their failed lithium and other evaporite resources policy which, were improvised by
the regime that ended up deposed, and its leader exiled.

Potosí then requested the annulment of Supreme Decree 3786, which sought the creation of the joint-venture company between YLB-ACISA. This agreement would, deliver the evaporite resources
to the German company on a golden platter for 70 years. This was, due to the low royalties that the department of Potosí would receive (3% of the gross production value) and would grant the German company with the power to produce and commercialize the raw material. In this way, the decree represented a departure in the formerly government-controlled industrialization strategy.

When the government decided to abrogate the decree with the hope that it would end the social upheaval that was unleashed by the electoral fraud, discontent was already widespread. The population was outraged at the electoral scam which sought to over extend the Presidency to 19 years.