IMF • Fiscal Policy in Latin America over the Cycle 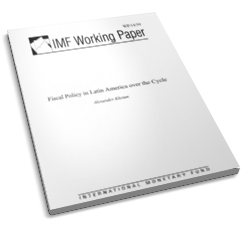 Alexander Klemm
This paper provides an analysis of the cyclical stance of fiscal policy in Latin America. Its contributions include eveloping a new measure of the cyclicality of fiscal policy, careful analysis of the statistical significance of results, and accounting for the effect of commodity prices on fiscal balances. The new cyclicality measure takes into account both discretionary policy action and automatic stabilizers, but excludes additional revenues that are due to applying an unchanged average tax rate to nominal GDP in excess of potential. The paper finds that fiscal policy has been procyclical on average in Latin America, but counter or acyclical in advanced economies. Country-specific results are mostly insignificant, except in a few cases where policy is clearly procyclical. For some countries (Brazil, Chile, Colombia, El Salvador, and Mexico), there is evidence of a recent move toward more countercyclical policies.
Descargue wp1459 fiscal policy in Latin america over the Cycle